Received a couple of telephone calls, messages and emails from Carmine Rojas Bass player with Bowie, Rod Stewart, Joe Bonamassa etc. , regarding his bass not playing correctly. He purchased a new set and it wasn’t quite the same gauge so the neck went out. We arranged to meet at Café Drummonds in Belmont Street and I went about setting it up.  A really nice bloke to talk to, he bought me a drink of orange and I got a photo taken with me and him. The band he was playing with “Ryan McGarvey” sounded really tight although I think the in house mixer lad was wearing drawn on ears, not real ones. 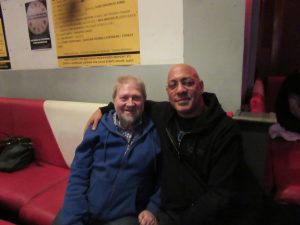 Well blow me down with a paper towel…….

Just received a phone call from Louie the Stranglers road manager asking if Baz could purchase another of my blade Tele bridge pickups for another guitar. Wow!!!……

Watch this space for more up to date details and photos.

In December 2015 I received a telephone call from Louie the road manager for The Stranglers asking if I could repair the #1 guitar for them. The next day they flew into Aberdeen and dropped off the instrument.

After an initial check I found a couple of dry joints in the wiring, but worst of all the bridge pickup, a Seymour Duncan blade pickup, was faulty and giving changing ohms readings. I wondered what to replace it with as there was not enough time to rewind etc. as they had a gig the next day. The only pickup I had close to the style was one of my own windings, so fingers crossed I fitted it and sat back and prayed it would be alright. We were invited as guests to the gig that evening and wow, wow, wow the pickup sounded so good. But better still Baz the guitarist looked really happy when he changed the settings etc.

I was one happy bunny…… 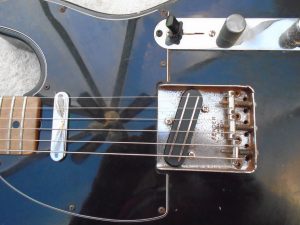